I made myself another one of the crunkly raglan t shirts like my grey one.  Its from Burda Style Febuary 13.  I am just waiting for the buttons to arrive in the post for my Kelly skirt so wanted something to fill the hole(s... there will be 7 buttons) while I wait.  I got this jersey for $1 in the op shop. It actually matches one of the colours in my Kelly skirt to be, I have a shortage of long sleeved winter Ts and I had the pattern already traced so a bit of an easy/lazy choice.  Its just plain green cotton jersey, quite a bit thicker and much less stretchy than the fabric in the grey one. Lazy (or only 1/2 my brain on) seemed to be a bit of a theme.

It ain't perfect but it works well enough.  I had one of those sort of mind blanks where whilst I remembered that the last time I made it I had cut the neckband shorter, because it seemed to be the same length as the opening, I didn't do it this time!  Some sort of muttering in my head about it being less stretchy but all the time I really knew I should BUT I didn't.  I am really a bit lazy and think I didn't want to faff with my tape measure.  Ho hum.  As could have been predicted the neck back is a bit loose and gapes a bit, its also slightly irregular around the front.  But hey ho I think people that pass me in the street will find many much larger flaws in my general appearance to pull me up about.  And well....no one has ever stopped me in the street to criticise either my general appearance or my sewing finish, or even to ask me if I made it in a kind of  'that looks awful you must have made it as you certainly wouldn't buy it' kind of a way so I'm not going to worry.  Still it might have been good if I hadn't let my brain do the same at the bottom.  When I cut the still too long (despite shortening to the shorter length on the pattern since the last one) bottom off and found one side to be about 2cm shorter than the other.  Anyway I folded the cut off bit in half and sewed it on as a band and well obviously it was longer one side than the other..but if I walk with a hunch to the left you won't be able to tell and will be more concerned about my silly walk.

Laziness and wonkiness aside I like it, wore it 2 days in a row and now its in the wash.  Where it will probably shrink because of course I was too lazy to have washed the fabric before (well surely the person who had it before and made something out of it would have done?!).  I guess most people would probably wash anything they got from the op shop before they wore it, oh well.  We'll see. 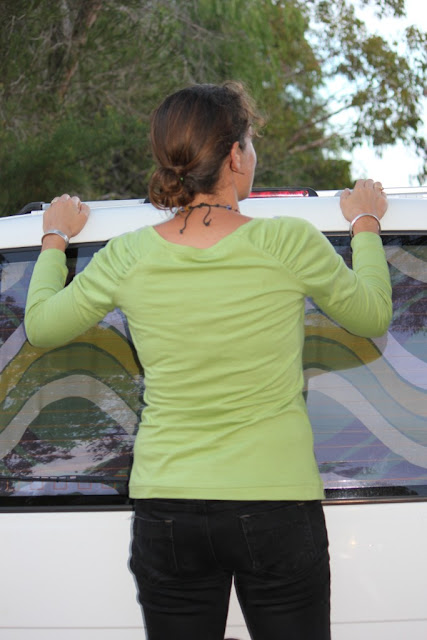