Making roaring noises when she sees a picture of a lion (or a bear for that matter) is one of Layla's favourite things at the moment.  So when I saw this lovely lion print I couldn't resist buying some and I made this little playsuit. 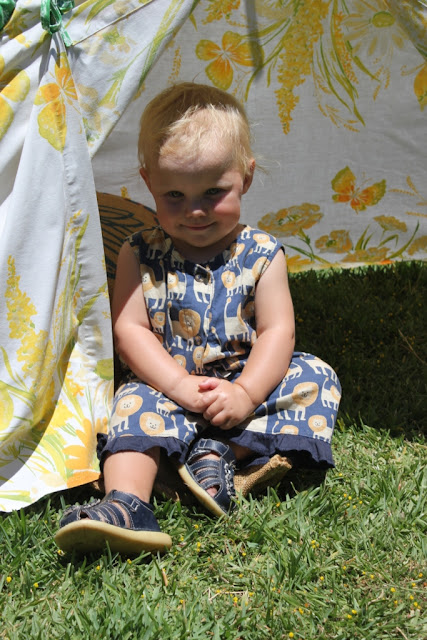 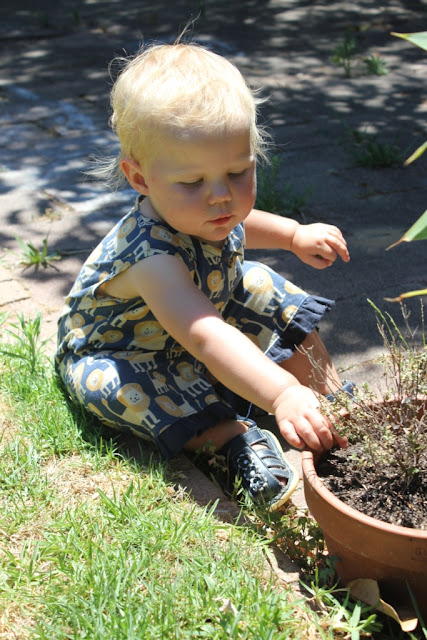 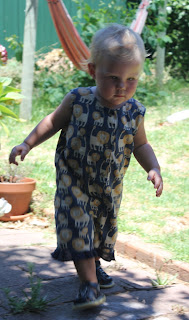 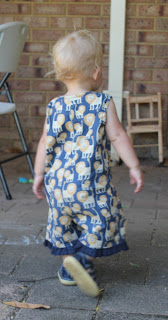 This is a pattern from a burda magazine from sometime in the 80's that I found in an opshop.  The adult patterns are all very boxy, and well 80's ish but there are some baby patterns that are sweet (boxy too but babies are relatively square things ..... with very rounded edges).

Its got little frills of navy linen at the bottom of the legs and buttons down the front.  I think she looks very cute in it especially with her little blue shoes.  I managed to get some good shots sitting down but she doesn't stand still long so those ones are a bit blurry as she tottered past!

You also get a bit of a sighting of another present I made for my 2 girls for Christmas. 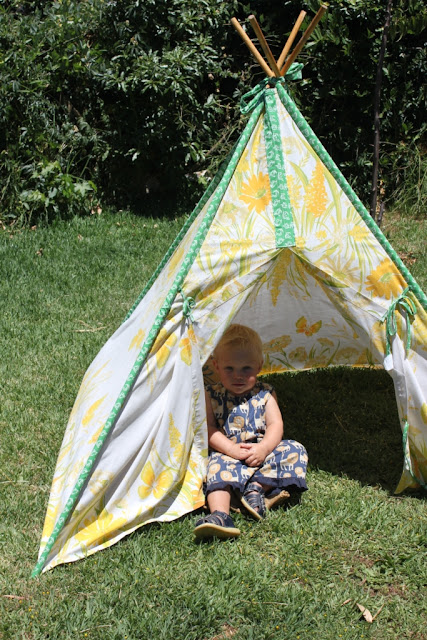 This was very easy to make out of a single sheet. ( I love the flowers and the butterflies on this one - perfect for a garden tent).  Basically you cut it into 3 triangles and 2 half triangles (which are at the ends) using all the material.   Then sew up the sides!  Easy.

You could sew the sides together and then make a tube for the poles by sewing a bit further in.  I decided to add contrast tubes for the poles so just sewed the 4 bits of fabric on each seam.  These tubes are closed off at the bottom so the poles don't slide out.

The selvedge means you don't have to hem it and as the ends of the sheet are already hemmed I just sewed a bit of contrast at the top to join them together, added some ties and did a long strip to tie the poles together at the top.

It worked pretty well.  Initially it was a bit tricky to keep the poles all the way in.  I thought the tension from the shape and the tie around the top would do it but once I put little screws in the top to attach the material to the poles it worked much better.  I am sure there might be a better way to do this, please let me know if you know.  Its also not very resistant to strong winds, I think pegs might solve this but as we are not really planning on camping out in storm conditions (well not in this one atleast) I haven't added any loops for them.

I had been meaning to make them a tepee for about a year so very pleased that I finally managed to do it and not make a dress!  Back to grown up sewing for a bit though now.