I've been sewing like a lunatic.  In fact I feel like I've made so many things for myself that I've started to feel guilty about it, like I've got too many clothes and really don't need another dress (which along with the odd top is what I nearly always seem to make, no inspiration for skirts or trousers??).  So selfish sewing has given way to a short burst of sewing for others.  Well my mum and my daughter.  My Ma is pretty much the same size as me but a bit shorter so before I made her dress I (obviously) had to make a sample one for me just to see where it could be made better. Not so selfless after all.

Despite all this muslin talk that goes on everywhere I have to say that I've never actually done one before.  So mine was a wearable muslin.  Very wearable as it turns out.  A simple sunny beach dress with a kangaroo pocket.  I was inspired (as always) by Bec at Naughty Shorts and her new design dress although the welt pockets made my head boggle, someday when I have more time...

I found quite a few things to change, even on such a simple dress.
So here are the 2 dresses.  Both made of lovely old  sheets that I got in the op shop.

The tennis thing got me thinking as did the fact that I have 2 large bags of knicker elastic that I got for $5 at the auctions.  Random I know, the local sewing shop closed down, shame but it was very granny.  I also bid on some bags of threads and more obviously useful things but not enough and so I ended up with the knicker elastic, about which I was actually really pleased.

So it had to be big matching tennis knickers.  Helpfully the very same copy of Burda (05/11) had a pattern for some big knickers in it.  They are a bit like the ones I used to have to wear at school for gym and athletics which put off sport until I was old enough to choose what I wore.  They are not bottle green though, that wouldn't be matching would it?   I am also stupidly pleased with these too and have been wearing them today with my dress and have managed to resist the temptation to bend over just so everyone can see my matching knickers.  And I don't really want to be hit by a bus either should I be, I would be proud to be found in my own hand made knickers!  I'll see what I can do for a photo of these, don't worry I'll wash them 1st.  Just about to make a pair to match my Ma's dress, just for fun.

I totally failed to get a picture of me in either of the dresses.  It wasn't for lack of trying but I can't find a good place to stick my camera to do a self portrait.  Sometime soon I'll get David to get me out and about in my dress.

I also made a little on for the bigger small person in the same fabric she loves.  A wanted to put it on before it was finished and kept saying dress, dress...the first time she has said these words.  Sweet.  I adapted it from the sew liberated blossom blouse pattern... lengthened it and shortened the sleeves and gathered it.... a super simple raglan dress.  Here's it and a top I made with the original pattern. 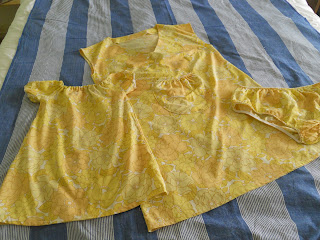 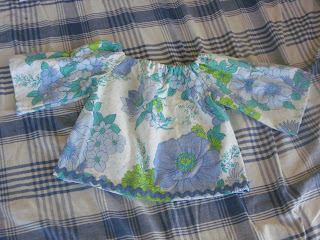